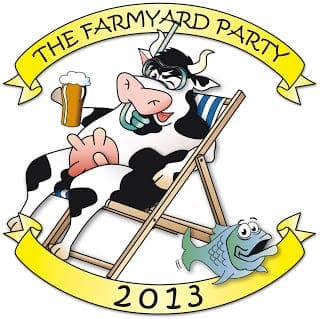 Probably the noisiest and most packed place to be during the Farmyard Party (other than the gents’ urinals and that’s another story) will be the BSH Big Top. Kicking off the action on Friday will be Broken Angel with a top set of solid rock covers, including possibly this one…

They will be followed by the Mee Mees. Now, I have to admit the only band I know of that name was the Screaming Mee-Mees from New Zealand and, as the Farmyard Musical Department tells us these Mee-Mees are from the North East, it’s probably not the same group, unless they met the North East of New Zealand… Rounding Friday night off, and back by popular demand, are the ever-energetic Ska Toons, performing on a stage capacious enough to accommodate the dozens of musicians. Well, it seems like there’s dozens…

After that, it’s the Black Bottle Band, playing the Farmyard for the first time, so be gentle with them. They’re descended from the Brown Bottle Band. Honest. Finishing things with a band will be Hats Off To Zeppelin, who will be playing a set of songs about millinery-shaped headgear. Probably. Seriously, watch the video below.

To find out more, watch for the next update here or visit THE FARMYARD PARTY