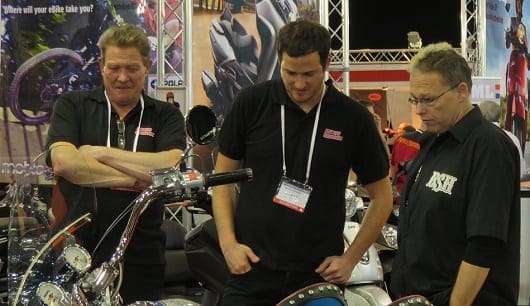 I think I’ve rewritten that title half a dozen times to try and find a combination of words including ‘Back Street’ and ‘Trade’ that doesn’t make me giggle! 😀

Silly o’clock on a wintery Sunday morning, off we set to attend the Motorcycle Trade Expo 2015 at Stoneleigh Park in Warwickshire. This is another first for me, and it was really helpful to put faces to names and [David Attenborough voice] to see the traders in their natural environment 🙂

Nik & Billy got to play with the Spyders ..

When viewed from the front I can’t help but think this touring (RT) version of the Can-Am Spyder looks like a road going version of the Battlestar Galactica! 😀

Several traders were marketing electric bicycles, and Nik and I both liked the vintage styling of these two .. though he does look a little worried that he may be asked to test ride one 🙂

Even I confessed that I might be tempted to try cycling one day if my bicycle could look as cool as these!

We unexpectedly got to meet with stunt rider Lee Bowers who was doing some promotional work with Parts Europe on their stand. (I suspect they’re both going to hate me for this photo)

I thoroughly enjoyed my day at the show, meeting the people who make, distribute, promote and sell the parts you buy. I have long known  the social side of biker life, and occasionally been a customer of one or two of the traders that were here, so it’s nice to be engaged in the flip side of the coin, and get to know the people behind the industry.

The last photo is my final and failing attempt to get a picture of . . .

A Michellin Man on a bicycle! 😀