MELKSHAM, UK, 22 March, 2017 – Avon Tyres has ramped up production of its acclaimed Cobra motorcycle tyre in response to the successful launch of the new Triumph Bonneville Bobber.

The Cobra product is the OE fit rubber on which every Bobber rolls off the production line, with the bespoke front and rear tyres specially designed for this premium custom bike.

The new twin-cylinder machine appeared at the end of last year to massive critical acclaim from journalists, industry influencers and the great British riding public.

High demand for the Bobber since its launch means that Avon’s Melksham-based factory has expanded production for the Cobra tyres, investing in additional manufacturing capacity to satisfy increased demand for the bike. 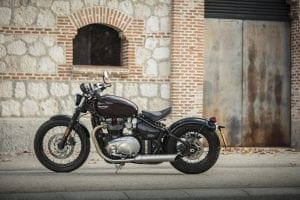 The Bobber’s radical chassis and styling meant that by working closely with Avon’s in-house development team, both firms were able to come up with the perfect riding solution – an all-new Cobra tyre, with special carcass construction and materials to suit the Bobber’s unique set-up.

Speaking about the production increase, Doug Ross, Avon Tyres’ Head of Global Motorcycle Tyre Sales, said: “This project has been a fantastic success for both Triumph and Avon. It’s also a real win for British manufacturing, showcasing the best of British at the highest level.”