The bike started life as a hardtail frame I bought in 2006 with the vision to build a bike like my dad rode in the 1980s, writes Dale. 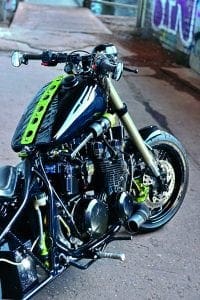 It’d been designed for a Kawasaki Z650 motor, but I’d picked up a GPz750 to use as a donor bike, and intended creating a cool, high ’bar/big sissy-bar bike. It was to be a budget build and was well under way when my son came along on Christmas Day that year, so the bike went on the back burner for a while.

Once all was settled and sorted, the build was back on, all done in an 8x8ft plastic shed with a wanked-out MIG welder and grinder that worked when it wanted to. I didn’t have that much money, but I had a vision and that was to use anything and everything to make what was needed.

Six months later the bike was built and running, and had a white frame, FXR Harley tank, single seat, 16-inch bars, twisted square bar sissy-bar, and high side pipes. I ran it for about five years, and picked up a few little trophies along the way, but the carbs were always a bastard to set up right and seemed to go out of sync’ for a pastime. It began to seriously piss me off, so after a little scan on a well-known auction site I came across a GPz Turbo engine, and, shortly after, said engine was in my possession. It was at a good price ’cos it wasn’t complete, and looking back I didn’t realise how much stuff was missing from it; throttle bodies, ECU, reg/rec, CDI unit, and so on. Oh, and the turbo was scrap too… 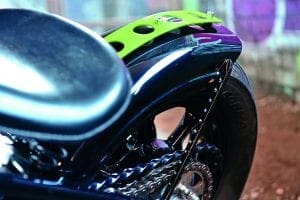 After a few months I managed to track down most parts needed so a revamp was undertaken to create a kind of street-drag chop with a turbo stuck to it. The bike was stripped to a bare frame and most bits chucked, and the frame was reworked and the sissy-bar and other bits removed. All the welds were redone and smoothed, and then the turbo lump was dropped in to mock everything up. A Harley rear ’guard was chopped and messed about with until it looked okay, and new struts made from old parts from a machine from work. I had a 6ft long strip of steel in the garage that I wanted to use to create a raised trim down the tank and rear guard, and me and my mate Rooney had the idea of putting holes down it. The steel was bent and shaped using nothing more than a vice and bending over the knee, and Rooney had the task of cutting all the holes.

I stuck with the FXR tank because I liked the shape of it, but the fuel pump for the fuel-injection system had to go somewhere. In my garage (I’d moved house and got a garage) I had a coil housing from a Ford which the fuel pump fitted into perfectly. I thought it looked cool stuck to the side of the tank so that’s where we made it go! 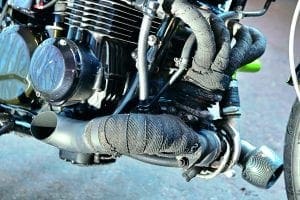 When it came to the front end I wanted to ditch the Virago front end that it was originally built with. I’d bought a set of White Power (WP) upside-down forks from a KTM Super Duke, and got the stem machined to accept the Kawasaki headstock bearings. To be fair, it wasn’t much of a problem, and with that sorted I set about sorting out a front wheel. I had a 17-inch Honda wheel with discs, so that was also made to fit and spacers knocked up, and then we made caliper hangers to take the Virago calipers as I didn’t have any others. I wanted to use just a single headlight and I had a set of twin Dominators, so I separated them and made a nice little bracket to mount that. I wanted low drag ’bars to tie in with the style I was going for (and it’s also more comfy to ride), and fitted rubber Renthal grips and ’bar end mirrors – I love ’bar end mirrors, they’re on all my bikes. 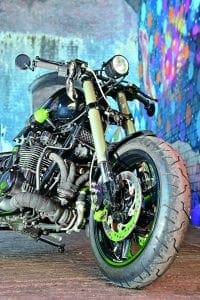 For the front mudguard I used a short GPz one and chopped it  to fit, and made what I think are pretty cool mudguard brackets out of the same stuff I used for the rear ’guard’s brackets. The chainguard and central frame supports were made from twisted  square bar. One-off rear spindle covers were made from candle holders and carbon-wrapped.

Once all the fabrication work was done I turned my attention to the broken turbocharger. It was totally scrap, so I did some research on the ’net and found that the IHI one Kawasaki used was very similar to the one Daihatsu used on their Copen car. I got one, and we modified the downpipes to clear the frame and make an adaptor plate to accept the new turbo. Then we made a short exhaust off the turbo – job done… except that yer right foot doesn’t ’alf get ’ot now! The turbo now spools up a lot faster than the original turbo ever would, and it runs on 7psi of boost, but will flick up to 14psi at which point everything gets a bit scary, especially using the Omex rev limiter with launch control – just like on a proper drag-bike, you can set the revs for lightning fast launches from the traffic lights and just dump the clutch.  It sounds incredible too! 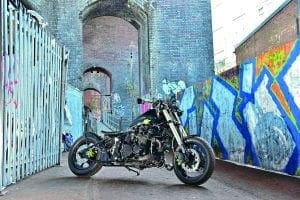 These days I don’t use the bike as much as I did before, but I could never get rid of it – it’s a part of me now… in fact, my wife will probably end up burying it with me!