With the advent of eBay back in September 1995 (it was actually called AuctionWeb back then, did you know that?), the biking world suddenly both expanded and shrank at the same time. 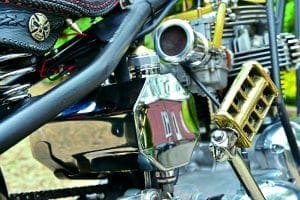 What am I blithering on about? Well, it expanded in that us lot ’ere in Grande Bretagne (and in other countries around the world too, natch) suddenly gained access to a world of motorcycle parts from around the globe that we didn’t previously, and it shrank in that any of those parts, no matter where on the globe, were suddenly no further away than just a few mouse-clicks. This has meant that, as I’m sure you’re aware, suddenly (that word again) unspeakably cool parts and bikes from far-off lands that we’d only drooled over in magazine pictures were available to anyone with a credit card (or a Paypal account). Bikes you’d only seen previously cruising the highways and byways of the US of A were now, as long as one has sufficient readies, ready to be purchased and put on the roads of this septic… sorry, sorry, sceptred isle – bikes from Birmingham, Alabama, on the streets of Birmingham, West Midlands; bikes from Boston, Massachusetts in Boston, Lincolnshire; bikes from California on California Sands, Great Yarmouth… okay, maybe not the last one then, eh?

Jeremy Weare, the owner of this rather stonking Triumph chopper, saw this here bike for sale on that there eBay back in November 2016. It was in Cali-for-ni-a, and it’d been donated to the SIU Foundation, a charity that raises money to give poor but bright students scholarships to universities. 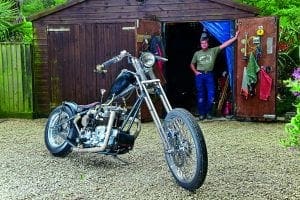 They were selling it to garner funds, and it’d been on eBay for about four weeks (separate weeks), but’d never reached its reserve. Jeremy had been the highest bidder every time, and he’d tried to contact them about it, but with no response, so he asked a good friend of his who lives there to ring them and make them an offer. They accepted, he transferred the money, and got California Shipping (www.calship.com) to collect it and store it until they had a container coming to the UK. It was collected on 23rd December 2016 and arrived on these shores in the first week of March this year, and one of Jeremy’s neighbours, Ian, happened to run a haulage company, Wells Haulage (www.wellshaulage.com), and so it was arranged that one of his vans would pick it up from Dover and bring it back to his native Zummerzet. It was picked up on the 15th and dropped to Jeremy on the 16th, and he immediately set to, charged the battery, gave it a quick oil change, cleaned out the carbs and added fresh petrol, kicked it into life and rode it down to his local MoT station. 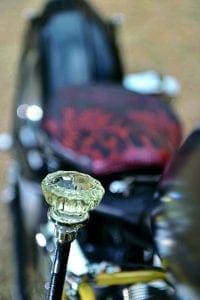 Sadly, it failed miserably; bad rear wheel alignment, no rear reflector, tail-light not up to UK law etc. Bum. With no time to get his hands dirty due to pressures of work, he opted to ride it about on the Californian plate (after sorting out the wheel alignment – it had a 150×16 tyre and a one-inch spacer between the rear sprocket and the wheel hub so he fitted a skinnier 130/16 and, hey presto, sorted) until he could get it properly registered. 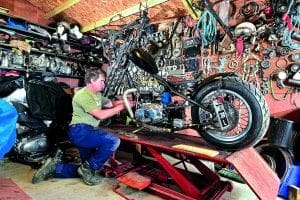 The bike started life as a chopper based around a 1967 Triumph T120R (for Roadster, with low-level ’pipes), and was apparently built by a guy named Rob Aide in South Carolina in late 2012 who did all that lovely brass work too. At the time of construction the petrol tank was gold and the rear mudguard was chrome, there was an external oil filter mounted to the rear right-hand side of the frame, and it had a magneto bolted on the end of the exhaust camshaft, and no front brake at all. You will find it on YouTube if you’re interested, just enter ‘1967 Triumph T120R chopper’. 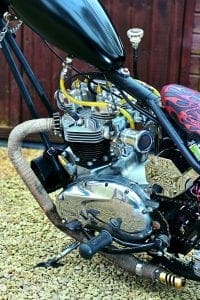 The motor has been polished to within an inch of its life, bored to 670cc, and fitted with modified cams, 30mm carbs with bell-mouth air-filters, a one-off hand-change (don’t tell me you hadn’t spotted that!), a Wassell electronic ignition and 12v coils, and one-off wrapped exhausts with brass silencer tips, while the frame it sits in is a seriously raked hardtail of unknown parentage. H-D forwards with Bonnie footrests give him somewhere to put his feet, and suitably funky ’bars on risers atop the loooong springer front end give him something to hang on to. The front wheel’s a trad’ 21 inch, the aforementioned rear is a 16-inch H-D with an unknown manufacturer sprocket/disc brake set-up. A ribbed single cap tank nicely matches the ribbed rear ’guard, and that one-off leather seat is an absolute work of art, 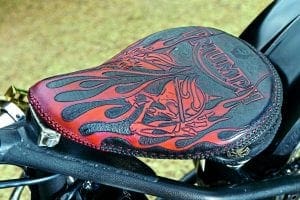 while the hexagonal oil tank is pure chopper, isn’t it? Tich from Somerset Forge (www.somersetforge.co.uk) widened and lengthened the side-mount number plate, and Jeremy drilled and filed and polished it to take the new diamond-shaped LED tail-light and British ’plate. He then fitted a new horn under the seat, and modified the master-cylinder housing to take a horn button, and with a Buell Iron Cross points cover hiding the mount where the external oil filter used to be (he didn’t like it at all), it was off for another MoT. This time it passed with flying colours (mention was made of FTW rear ’guard supports…), and the Triumph was, as Jeremy says, ‘on the road forever’. Half a world away, Rob’d be proud, don’t you think?