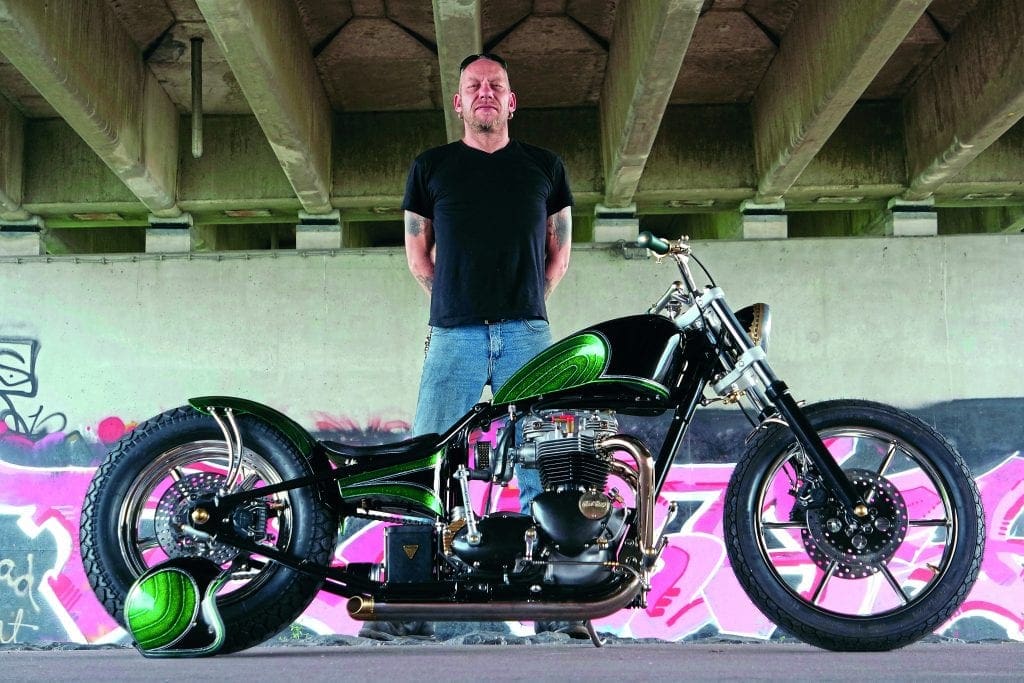 The idea for this bike came some 30 years ago when my good mate Reitse acquired a Triumph front frame loop and engine (which had been, apparently, overhauled). I’d built several Triumphs that’d been to his liking so the plan was that I’d build it for him. We were both in our 20s then, and little did we know how long it would take…

Shortly after that, though, I was hit by a drunk driver and lost my lower leg/foot, hence the name FootLoose. Doctors figured they’d try and put it back on, which took four years and more than 30 operations, and plans for the bike were moved to the back burner. I then moved abroad, not to return for the next decade, and contact was almost lost, but when I moved back to Holland Reitse heard about it, got on his bike and rode to Amsterdam to find me as his chop in the making was still waiting. He’d been to see several other bike builders in the meantime, but decided he didn’t like any of the stuff they were turning out, and that he was going to wait for me to return and build his bike for him. That’s real faith, isn’t it? 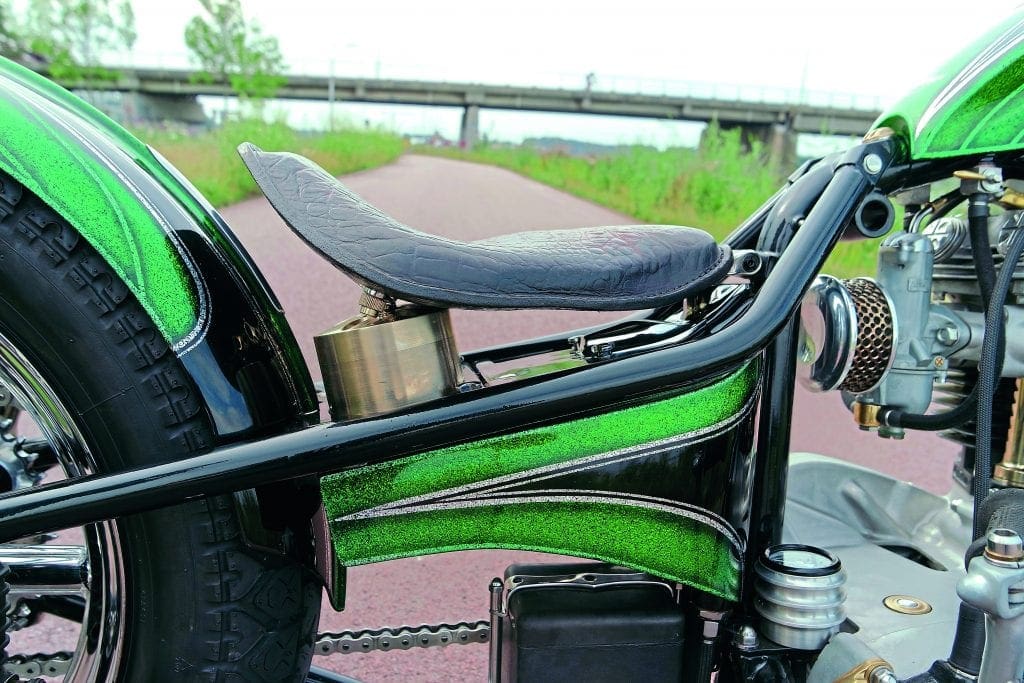 The plan was for a pretty basic bike, nothing too fancy, easy and relatively cheap to build. I convinced Reitse to buy a bolt-on hardtail/oil tank/battery box combo off the internet from a US-based company as I couldn’t build those parts for the $800 they were advertised at. He was very sceptical about buying anything off the internet as he’d never done it before, and as it turned out he was right – they turned out to be a famous rip-off artist who’d conned lots of customers, and Reitse never received anything and lost all his money. Feeling very guilty I decided I’d build him a new hardtail section as a gift to make up for his loss, and give him a one-off bike. 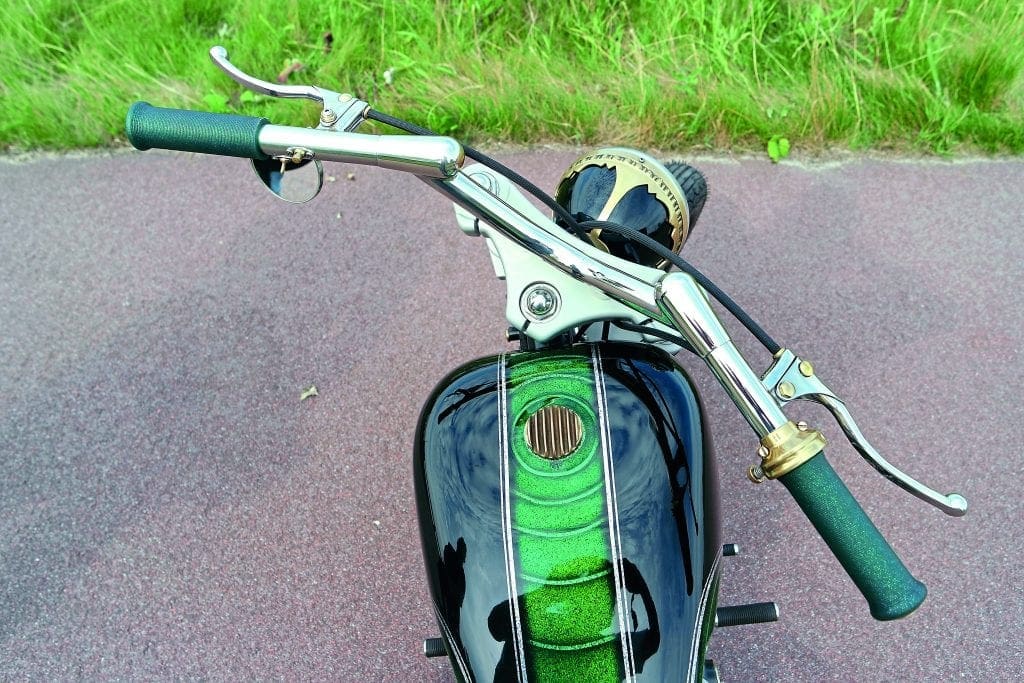 The trouble is I’m not one who likes bikes to be average in any way and always try to be a bit different from others, so the hardtail turned into a radical drop-seat frame, and the pretty basic, nothing too fancy, easy and relatively cheap to build bike plan went out of the window. There isn’t anywhere near enough room here to tell you about everything that went into constructing the bike you see here in front of you, but I will tell you about a few of the more interesting/technical parts of the build, okay? 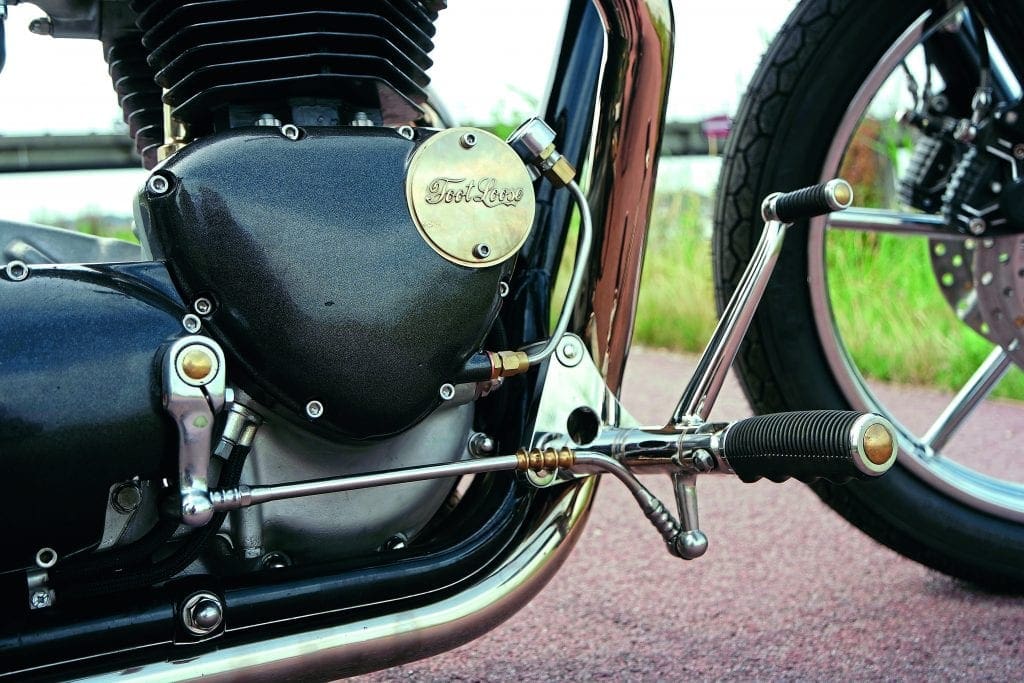 Bearing in mind that both he and I are six foot two tall, and getting a big bloke to look cool and be comfortable on a tiny Triumph isn’t easy, I decided that the rear would have to have a lot of stretch built into it. To make sure there was minimal flex in the new tubes, it was built in a trapezoid shape when viewed from behind, meaning the upper tubes are not parallel with the lower ones – the uppers run inward from the axle plates to meet the front loop, and the lower ones run outward to meet the lower front rails, and have heavy-duty mountings in and around the rear frame tubes. This frame is solid! 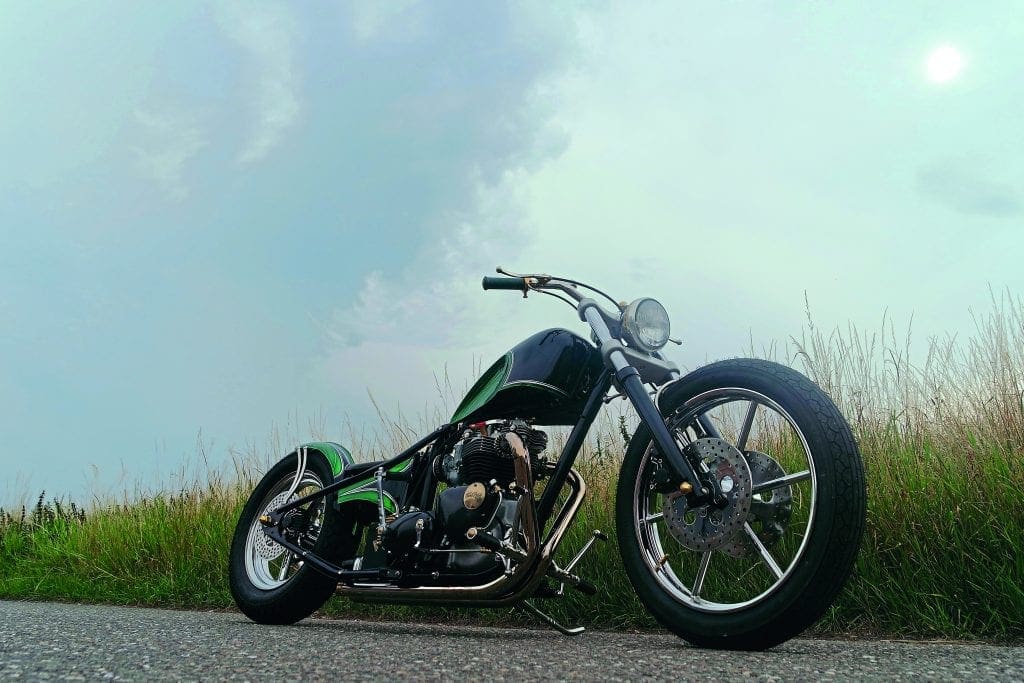 Due to the drop-seat design the oil tank had to be a one-off too and is rubber-mounted. As Reitse’s back isn’t as good as it was when he was 20-odd, I mentioned that there’s such a thing as air-ride for the seat instead of simple springs, something I wish I’d never said as it caused heaps more extra work, and involving customising a mini compressor to fit inside the oil tank, fabricating custom airlines, fittings and valves, and modifying a pair of Goodyear airbags to make it all as small as possible, and able to be housed under the seat, with stainless/bronze covers to make it all look neat and tidy.

The seat can now be lowered or raised by the touch of a brass switch, just like the ones on the handlebars.

As things’d got really crowded under the seat, leaving not much room for an oil tank, it was decided to make the frame an oil-in-frame design. The main tube houses the oil-level sight-glass and has a massive stainless drain plug (with a magnet) in the bottom of it, making life easy when changing oil. It’s not really used for the engine, but acts as a heat sink and for filling/draining – oil is taken/returned to the oil tank via a stainless filter feed and removable return line through the one-off alloy oil cooler/filter unit. 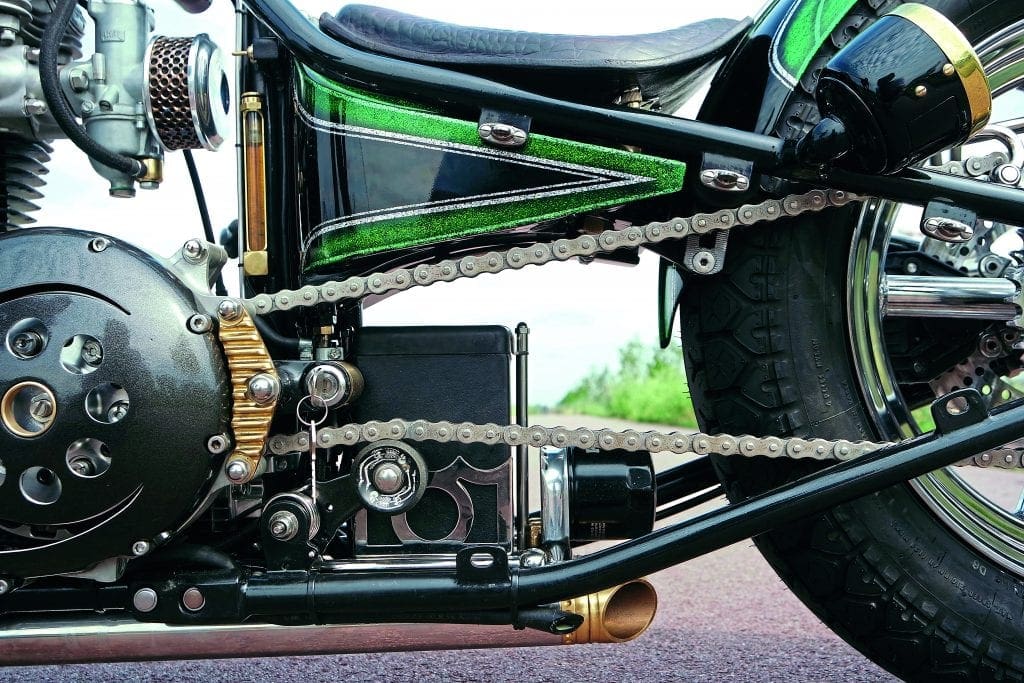 Total oil capacity is now 3.25 litres, a full litre more than standard OIF bikes.
Round spoke Invader wheels spent hours in the lathe, narrowing the rear hub flanges for the disc and sprocket to get the chain and brake in line, and the rear hub was extended to accept a speedo-drive unit. The front was originally intended for a tiny drum brake, but it needed decent stoppers so wheel and disc spacers were made to house wheel bearings/seals to bolt to the wheel centre and receive a pair of 10-inch discs. After deciding on the tyres and buying/fitting a pair of classic Continentals, it turned out the 130-section MT90 rear isn’t actually 130mm wide as stated – it’s actually 140mm wide, which meant that it wouldn’t clear the chain, necessitating the engine to be offset by 6mm to the left. 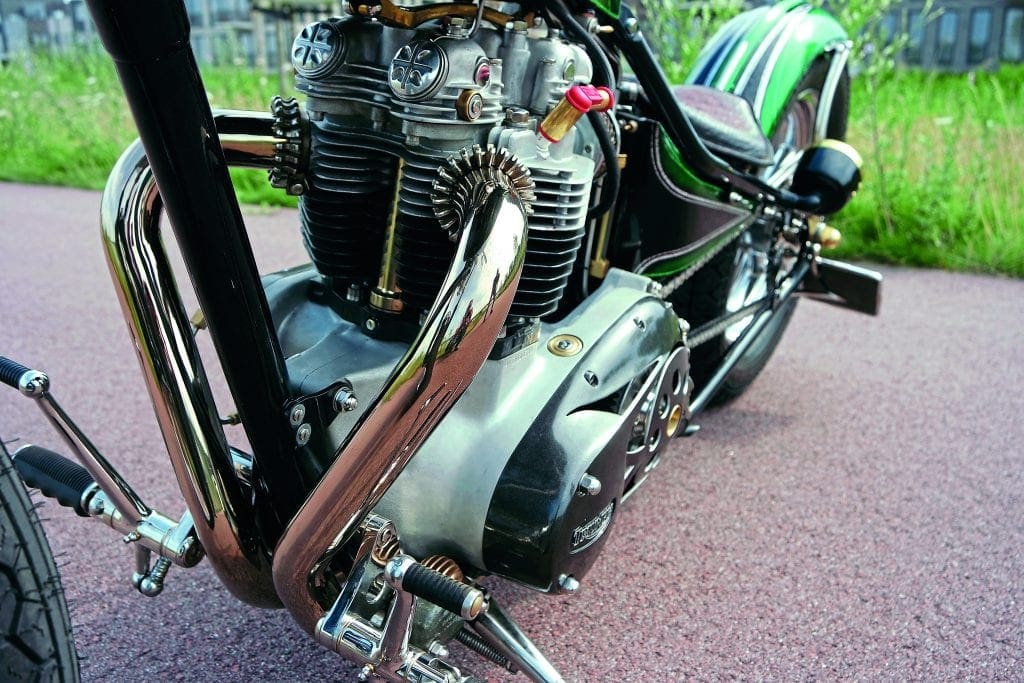 The ‘overhauled’ engine turned out to be a right mess – scored cylinders with non-Triumph pistons, valves pocketed beyond use, broken valve seats, heavily ground and scored con-rods, messed-up/blocked sludge-trap, rusted solid oil pressure relief valve, a rusted gearbox full of shavings, a clutch and alternator good for the bin, same for the oil pump, and there wasn’t a drop of oil or grease to be found anywhere. A complete engine rebuild was in order.

Despite what you may think, I’d like to stress that although it perhaps looks like one, this is NOT a show-bike! It was built to be used, and used well; Reitse does around 20,000km a year and he rides it hard and fast – that’s what the bike was built for.

It will never ever be sold and he intends to ride it till he’s old, really old! Should anything ever happen to him, it’ll return to me and I’ll maintain that tradition in honour of him. It took around 5,000 hours to fabricate and build, partly because most parts were made at least twice, if not four or five times, until I was happy with them. You know what it’s like; just as when making pancakes, the first one is usually for the dog… 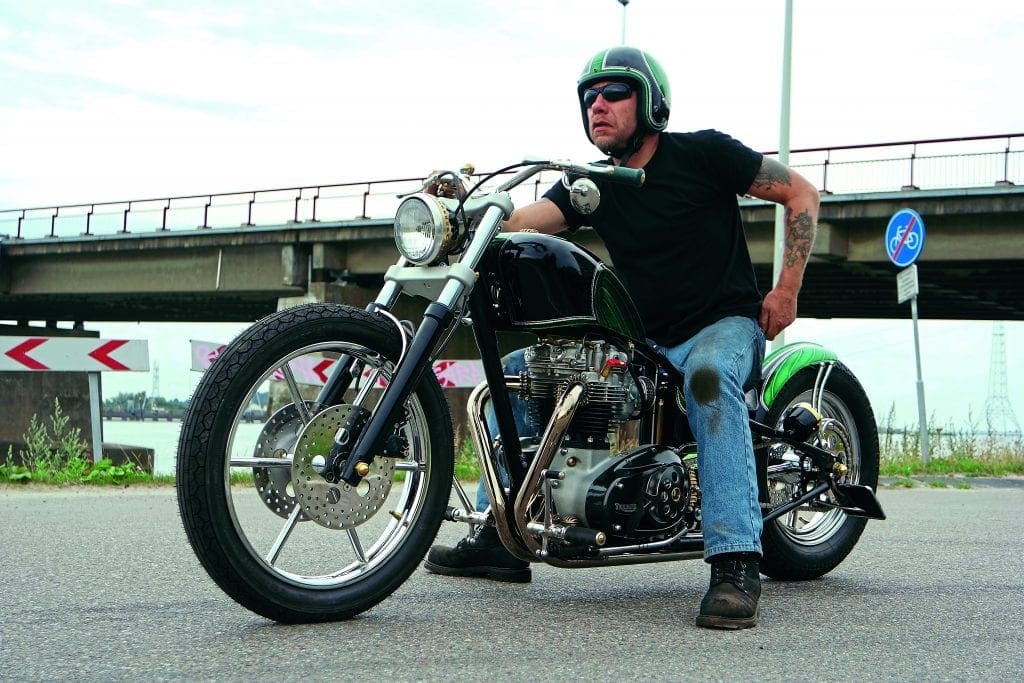