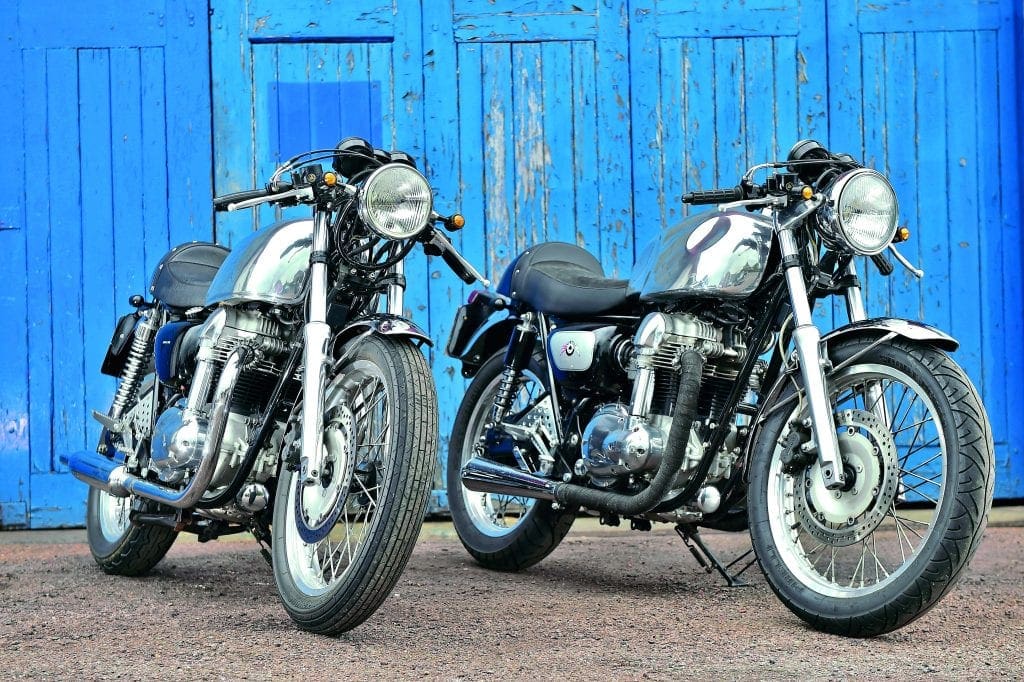 In terms of building motorcycles that became known for their performance, Birmingham Small Arms, or BSA as they’re more commonly known, didn’t, or perhaps haven’t, done quite as well as their great rivals Triumph or Norton.

Yes, I’m aware that the Gold Star, both in its 350cc and 500cc variants, 1938-1963, is lauded as one of the greatest British motorcycles of all time, especially the DBD34 which was reckoned to be among the fastest production bikes on the planet in the 1950s, but not much else in BSA’s 62-year history (the first BSA motorcycle was the 3.5hp in 1910, and in 1972 the amalgamated Triumph-BSA company, in deep financial doo-doo, joined with Norton-Villiers to form Norton-Villiers-Triumph, spelling the end of the BSA marque, although certain models did soldier on for a few more years bearing the star and stacked rifles emblems) could really cut it in the performance stakes, not when compared with the likes of Triumph’s Bonneville or Norton’s Commando anyway. 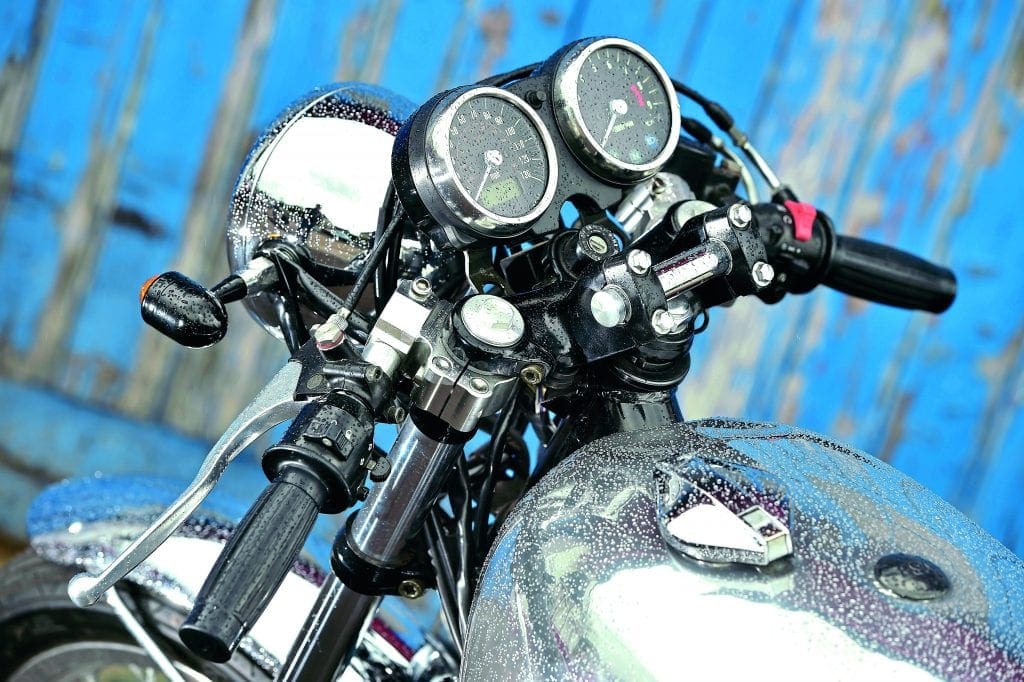 The closest thing they had, one supposes, was the Rocket Gold Star, 1962-63; a tuned (46bhp, rather than the 35 of the stock model) A10 Super Rocket engine in a factory-modified double downtube Gold Star frame. Just 1,584 of these were produced (according to the font of all knowledge and wisdom, Wikipedia, so there might’ve actually been several million), of which 272 were off-road competition models, nine went to California, and one was fitted with a sidecar by Watsonian for the Earls Court Show in 1962, effectively rendering all the tuning work done to it utterly pointless.

The RGS was a nice-looking machine with its chromed tank, black side panels, shrouded rear shocks, and slim seat, and when fitted with dropped ’bars or clip-ons and rear-set ’pegs looks, to quote a Mr E Turner Esquire, like it’s doing 100mph while standing still… although he was, of course, talking about the Triumph Bonneville (or the Daytona, I forget which). All these years later, they’re still nice-looking bikes too and, being rarer than most of their rivals, command far higher prices – a couple of websites I looked at reckon they’re around £22k these days, for an immaculate one, whereas even the sexiest ’59 Bonnie is only around the £15k mark. Scary! 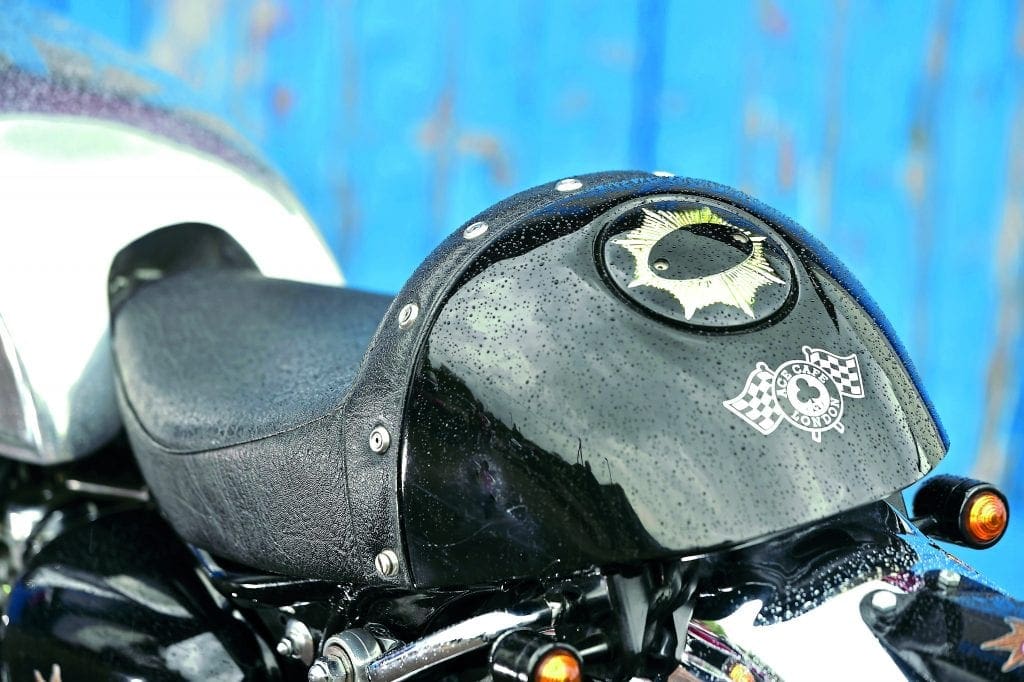 The chaps and chapesses at The Motorcycle Workshop in Sussex quite like Rocket Goldies too, but they don’t really have upwards of twenty large to go spunking on 56-year-old motorcycles, so they’ve done the next best thing – they’ve created their own using much more reasonably priced Kawasaki W650s. The two bikes you see here are actually the second and third of the Kawasaki retro twins they’ve built (the first was featured in the December edition of BSH), and they used the shape and styling of the original RGS to come up with the look the two bikes wear so proudly.

They’re both actually fairly stock bikes, as motorcycles featured in this ’ere magazine go, running fairly standard frames, engines and running packs, but don’t hold that against them. You park one, or both, of these anywhere and people will walk past rows and rows of identikit sports bikes to check them out, just as they would with any decent custom. 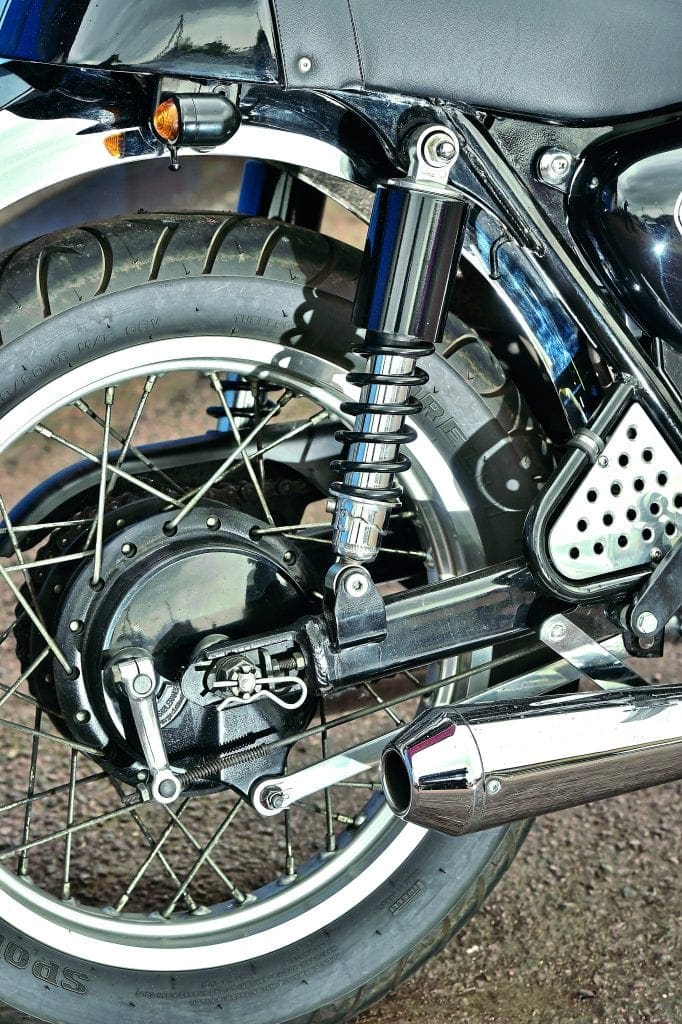 They’ve both had their subframes modified, their rear ’pegs removed, and traditional Raask rear-sets and clip-ons fitted, and they’ve been polished to within an inch of their lives. The differences between them are minimal really; the one with the black n’ silver ’plate runs an alloy Lyta replica tank (which was an utter twat to fit apparently), BSA-style exhausts, chrome Bonneville shocks, a six-inch headlamp on BSA Gold Star mountings, a Clubman-style seat, and a dummy oil filler on the side panels, while the one with the yellow ’plate runs a BSA replica tank (which was a piece of piss to fit… go figure) as well as the BSA replica seat unit (similar to the one on the other bike) that’s been re-covered in Alcantara by an Aston Martin restoration specialist, wrapped ’pipes with reverse-cone megas, the stock headlight on polished alloy brackets, and it’s recently had its fuel tank painted in black and silver and signed by American GP legend “Fast” Freddie Spencer.

Both bikes, Tony and Jeanette from The Motorcycle Workshop say, have all the feel and persona of the classic BSA, but with the advantage of reliability and, of course, electric starts and brakes that actually work. The exhausts make a superb ‘twitter’, just like the Rocket Gold Star did back in the day, and both bikes are a genuine hoot to ride. The black n’ silver ’plate one has, since these photos were taken, been sold and the new owner is absolutely delighted with it, but the other is up for sale – if you’d like to own it, ring them on 01444 882688. 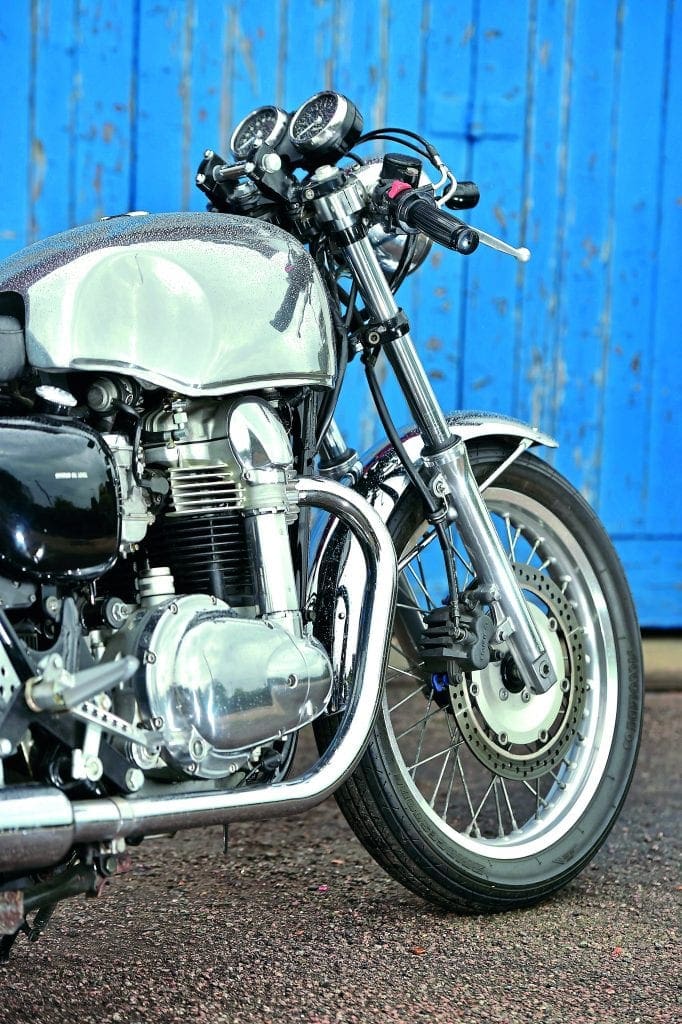