Anyone who’s familiar  with Gloucestershire and  the surrounding area will be aware of Crickley Hill – the long, steep climb up from Gloucester to the famous Air Balloon pub at Birdlip – and how long and steep it actually is. Well, unless you’re riding up it on a new Harley-Davidson Sport Glide… 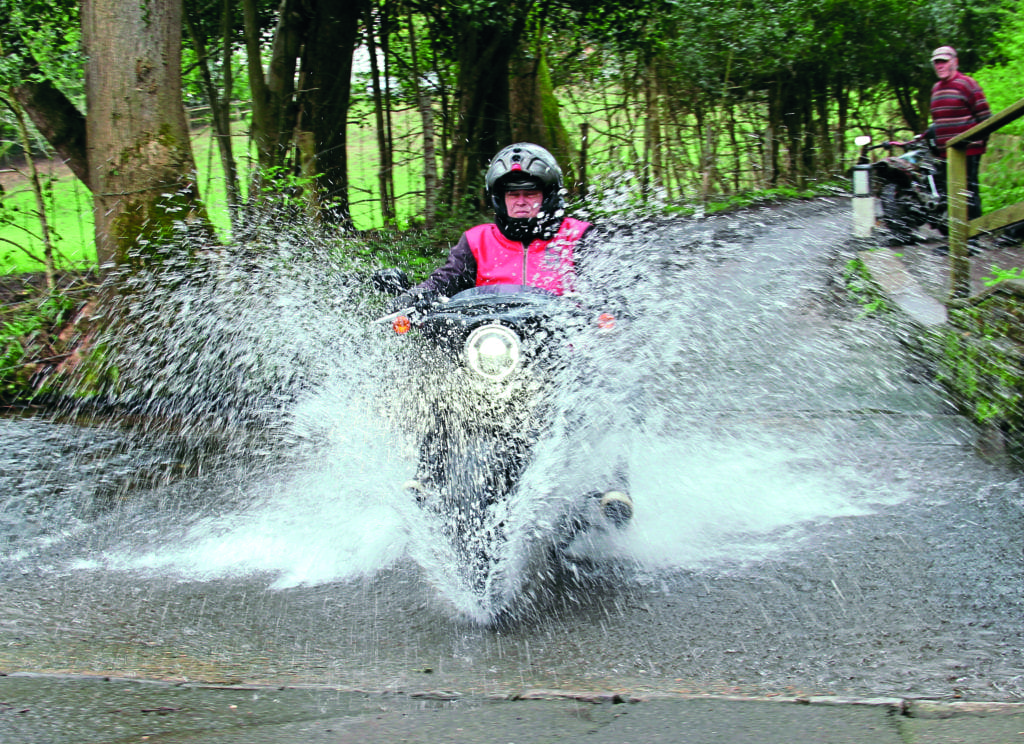 No, on one of these new Softails from the MoCo, Crickley Hill is as flat as Norfolk, it really is. Both meself and Mr Andy Hornsby, editor of American-V magazine and ex-BSH computer wizard from days gone by, were quite stunned exactly how effortlessly the Sport Glide dealt with the 555ft, 11% (28% at its steepest) climb, cruising up it with nary a downward gear-change. We stopped at the pub for a spot of luncheon, both of us needing a bit of a head-refresh after a morning spent dealing with the vagaries of the British rail system, and even though we’d only covered five or six miles since picking up a ’Glide  each, both of us were  quite impressed.

And, after we’d gone our separate ways, he back up to Cheshire and me back across to the wilds (well…) of Suffolk, we remained impressed… well, I did, I can’t really speak for him, can I? I racked up 1,280 miles in the two weeks H-D UK entrusted me with a 1,050-mile-old Sport Glide and, as seems to happen every time I ride one of these modern Harleys,  I really didn’t want to  give it back at the end of  my tenure. 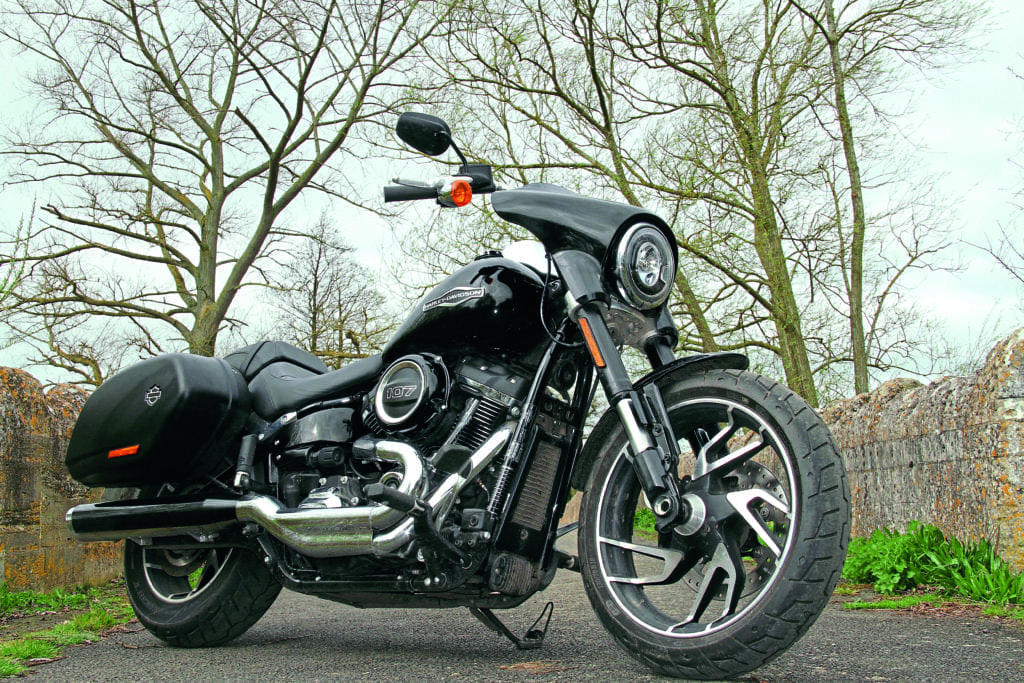 The new ’Glide is, according to the Milwaukee manufacturer, intended to be their most versatile machine yet; a bike capable of cruising, commuting and touring, and while hacking through inner-city traffic might not be its favourite environs (although I suspect it’d deal with doing it quite happily), with its removable luggage and wee fairing, low seat height, and surprising performance, there really isn’t much that, in normal circumstances, it can’t do.

It’s powered by Harley’s 1745cc Milwaukee-Eight 107 engine, one of the latest generation H-D motors, and it’s an impressive lump. Harley don’t usually make too much of power figures, and instead prefer to focus on torque, and the Sport Glide makes a very healthy 107ft-lb (145Nm) at just 3,250rpm. It’s smooth too; nothing really vibrates any more, due to the two balance shafts, even though the engine’s solidly mounted in the frame (no rubber mounts), but retains its character – by reducing the idle speed (I saw 780rpm at one point), the engineers have ensured that it feels pleasingly lumpy at the lights, but cruises smoothly at 70mph and beyond. You can actually see what’s behind you clearly in the mirrors too, even at tickover, and as it’s oil-cooled there are no cables or ugly water pipes cluttering up the classic look. 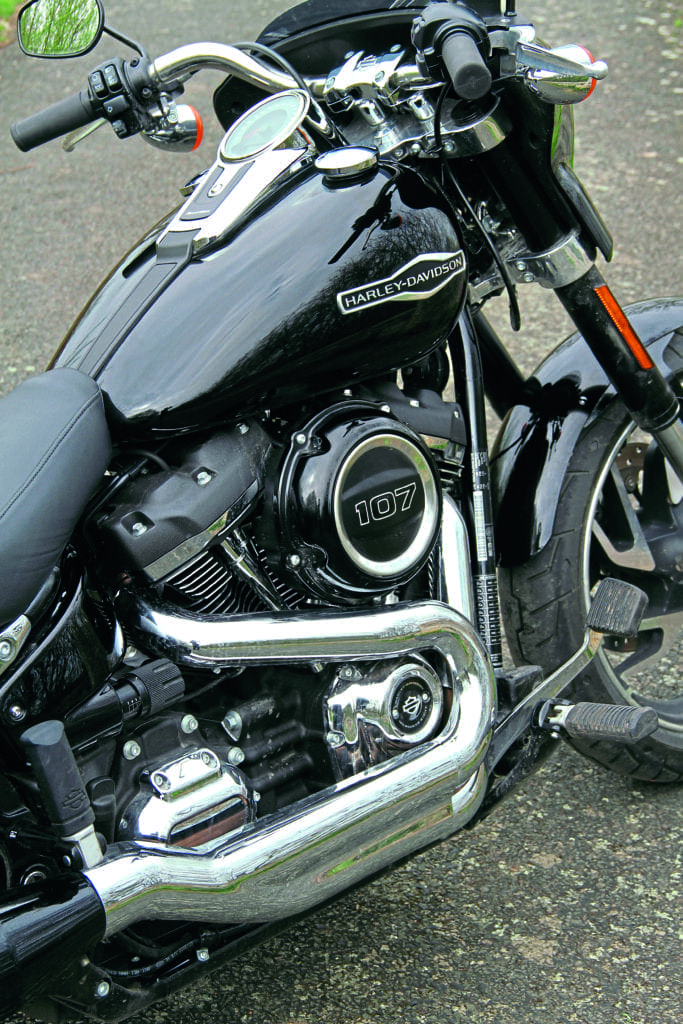 It’s an engine that’s designed to nod back to the H-D motors of yore, but be completely up to date; fuel-injected, with four valves per cylinder. Harley claim 53mpg which, with the 18.9-litre tank, could mean a range of up to 220 miles… although not with me aboard. Exhaust-wise, it is, of course, far too quiet, but you can remedy that easily enough if you want to.

Its chassis is, essentially, the same as the others in the Softail range, except for the 43mm USD forks, and it’s taut, stable and sure-footed – far more so than you might expect something of this size, and a Harley to boot, to be. Every time I rode it I found myself laughing; you shouldn’t really be able to hustle a Harley along like you can with the ’Glide. The engine has sufficient power to make motorway and A-road cruising effortless, and enough grunt to have it hustling out of bends far, far more quickly than you might expect. The Michelin Scorchers grip well in most circumstances, and the front brakes are one-finger, while the rear is infinitely useful, and the suspension is capable of dealing with most of the many, many pot-holes that’ve appeared in our roads after the winter. Well, as long as you look where you’re going anyway and avoid the really big ones… 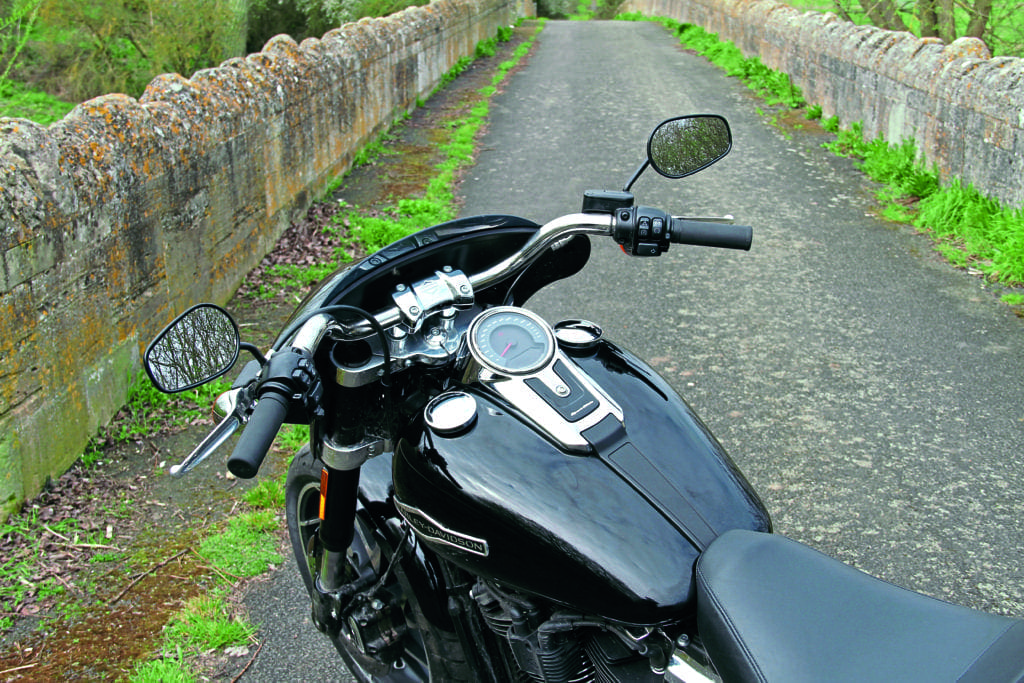 And if you want to go away for the weekend, as long as you think carefully about your packing, the removable panniers are useful. They’re plastic, and lockable (and have rubber seals around the inside edge), and damping struts ensure they open slowly and gracefully like a posh kitchen drawer or a 1980s cassette deck drawer, but they won’t quite take a crash helmet (not even an open-face).

You might struggle getting a pillion to accompany you though – my good lady said that the pillion perch was probably the most uncomfortable thing she’d ever sat on (stop sniggering). The pad is narrow and very hard, and it slopes backwards and this, combined with the high rear ’pegs, means that she felt as though she was about to slide off the back the whole time. Gripping with her thighs to prevent this caused cramps and backache, and the only solution would be to fit either a backrest or a new, more suitably sculpted seat – both of which, funnily enough, are available from the H-D accessories catalogue.

So price then; well, in the basic Vivid Black, the Sport Glide costs £14,995, including the luggage, but if you want colour (Twisted Cherry and Silver Fortune) it’s £15,345. Book a test-ride at your local Harley-Davidson dealer or go online to www.harley-davidson.com