Well, it all started when I was in hospital delirious with fever… 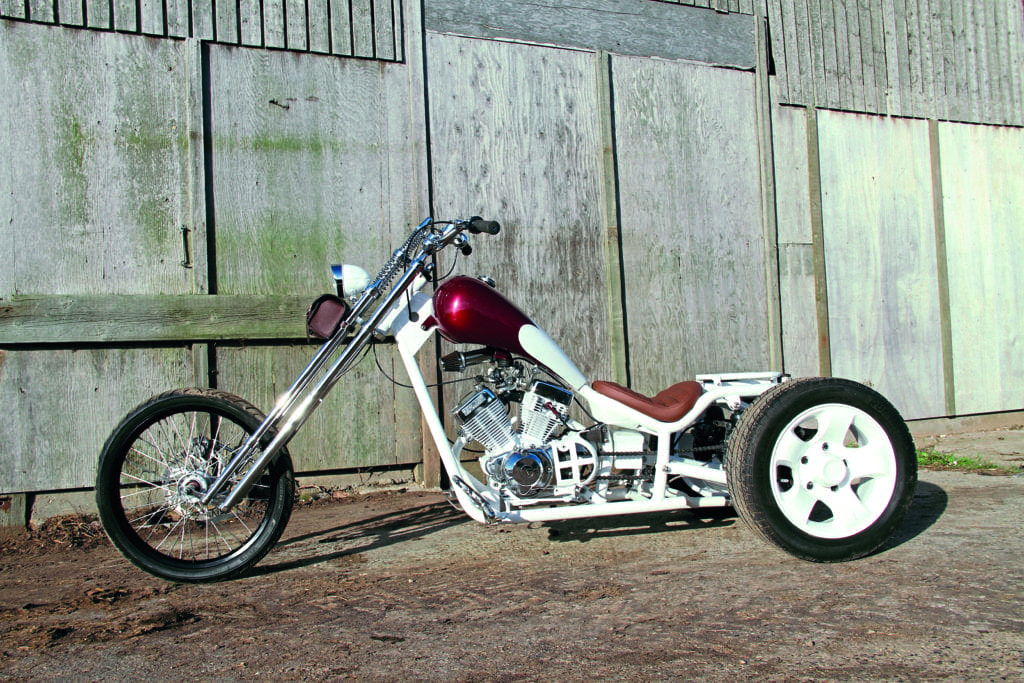 I got a phone call from Jim (yes, the Jim, the other half of Smiley Monkey’s Custom Cycles) “Oi, I’ve just ’ad an American bloke up Revved Up and he’s followed me back to the workshop… something, something, blah, blah… bunk up.” Questioning his sanity (well, more his sexuality) I asked him to repeat what he’d said while I put the phone on speaker for a better sound quality (honest). What I heard then was a bit less Jeremy Kyle and a bit more me. It turned out Jim’d bumped into a guy called Mark, AKA Tex, who had an all there but poorly executed Bunker trike that he wanted overhauling and painting, with maybe a bit of polishing. After seeing what we do, he decided to bring it up and have a chat, so, a few days later, we were back in our workshop with me better and Jim not a cottaging, sex mad, newly discovered bear.

We were having a ponder fag when we heard a bit of commotion outside, so out we go to see the trike for the first time; rolling chassis, a couple of motors (one Yamaha and one Yamaha copy), a bag of well-marked wires and a box of grimy rusty parts. Oh, and a bloody lovely set of springer forks that were nice and long with a bit of chunk to ’em. So, after a few coffees, a fag break and a bit of brainstorming, we discovered what he did and didn’t like and want, so we said our goodbyes and, as he was walking out, he turned around and said: “F**k it, you guys can have carte blanche.” My first thought was “mmm, pudding”, but it turned out he meant we could do what we wanted. It was his accent. So with a budget, time scale, no definite direction and a f**kin’ great grinder, off we went. 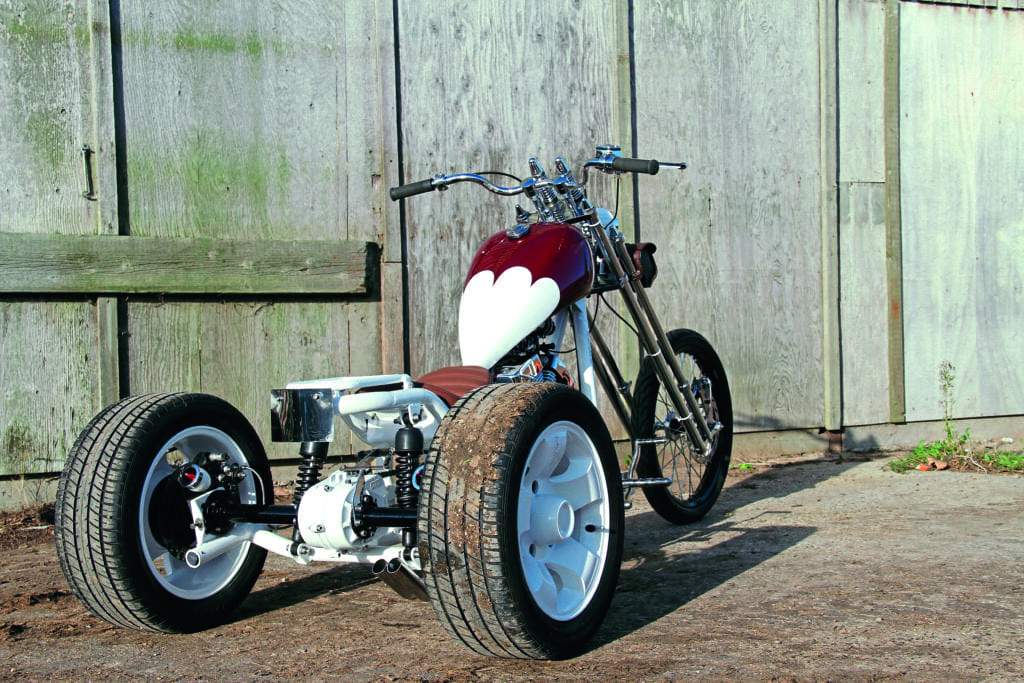 First job was to cut 20ft off the length of the seat rails and finish them with a tidy loop. Stance was next; it sat far too high and the posture was all wrong. So off came the stock shocks and they were replaced with some aftermarket short ones we had in stock. We realised straight away the old 16-inch front wheel was nowhere near big enough, so a motocross 21-inch was slipped in. It immediately looked a lot more classy and raising the front levelled the frame out more, also giving it a bit more rake. The original tank got a bit of stretchin’ to make it sit and flow better and then we began cleaning the frame up by removing the old footpeg mounts and any other unused brackets, like the ones for the old battery box, old exhausts, old ‘leccy’ box, etc.

After doing all that we stood back; itchy ’n’ greasy but with a sense of accomplishment. But something still wasn’t right. It was still too long – it was the swingarm, it just didn’t look good enough. Tex was called and told of the dilemma and we explained we needed (wanted) to cut the swingarm by a couple (well, eight) of inches. We quoted his last words again, carte blanche, and he agreed, which was a good thing as we’d already cut it… 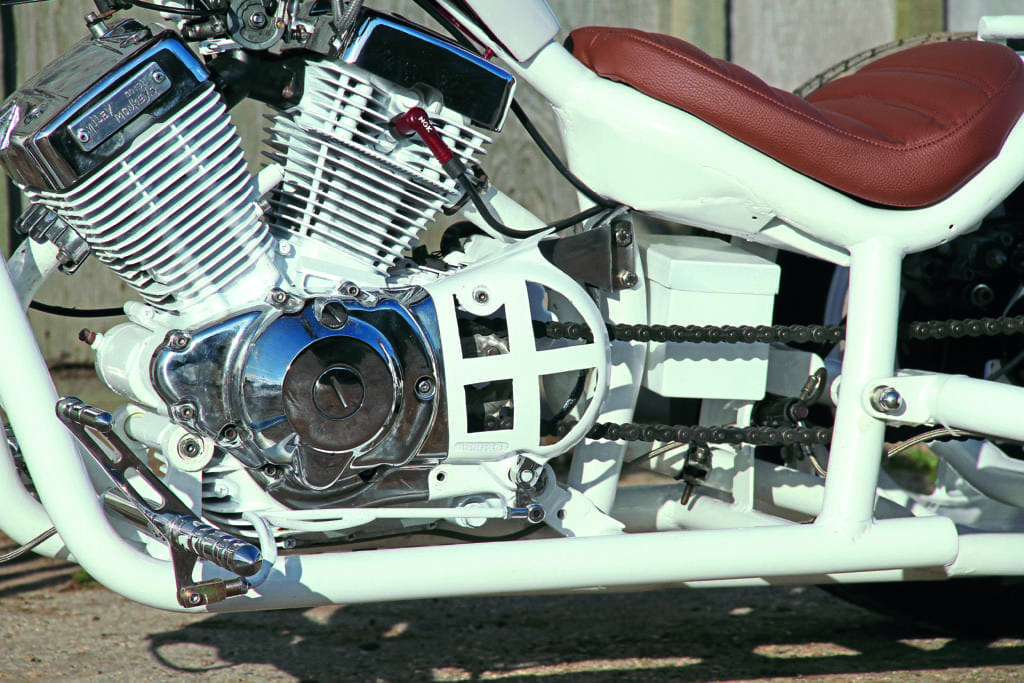 That sorted it; now it was a tidy trike with a 250 Yamaha vee-twin engine and not a hint that it was once a nasty Chinese thing (with a nice front end). It now sat aggressively, but still had a classic stance.

With a timescale to keep to, we wanted to get all the unpolishables to a powder coater pronto, but we kept getting ridiculous timescales – one month, two months. Poop. Jim got on the interweb and found the number of a firm in Sudbury, AS Powdercoating, and the geeza said “two days”. We had a bit of squirt up there in the van, along with a trip to Danny’s burger bar, and 30 minutes later we were there. As promised, the next day we got a call from them (it turned out he had stayed up most of the night to get it done) and on the way to picking it all up we nipped in to see Ron at Carisma Bodytech, our painter of choice, with the tank and, as usual, he delivered with stunning crisp lines. Nice one, Ron. 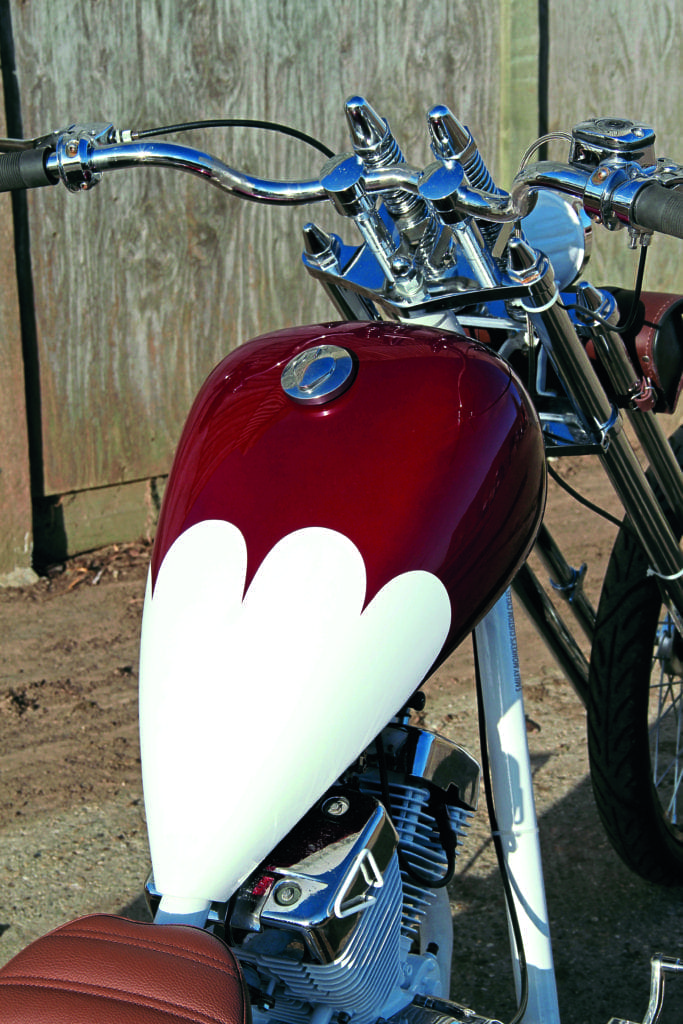 Well, you all know how a build goes – cut, stick, splash, voila! Not at Smiley Monkey’s; we tend to ponder a great deal (fag breaks) and go through ideas (take the piss out of each other). We’re always on the same wavelength (skint), but we’re livin’ the dream, baby, pushing the boundaries using old school techniques and keeping to a shoestring budget so that we can supply great bikes that’re affordable for regular folk.

We got the Bunker back together, stood back, looked at it, nodded and rang Tex to come and have a look. He loved it from the moment he saw it, and the rest is history. It took Best Trike at its first proper show (the F U Mcc’s one at The Bell in Kesgrave in April) and if there’s any justice in the world it should take a few more too.