I’ve owned my Harley Shovelhead for around six years. I bought it after owning a few modern Sportsters that I modified (hardtailed) and turned into retro-looking bobbers, but I’d always had an urge to do a real old-school Harley bobber. 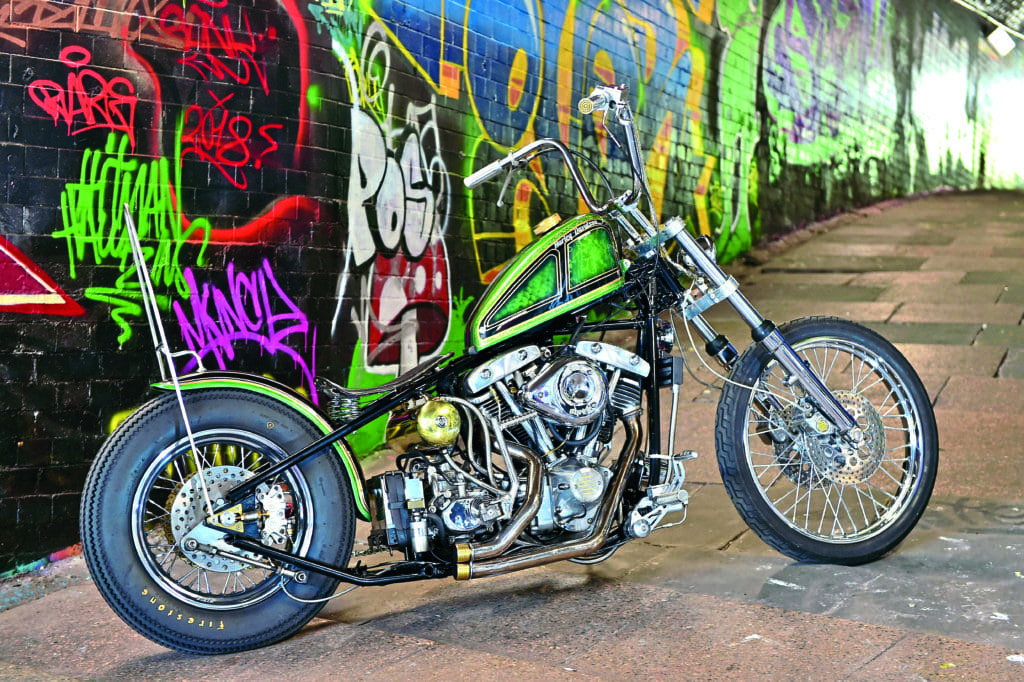 I found the ’79 Shovel on the good old web. It’d had a full engine rebuild with some good trick parts and it’d hardly done any miles since, so was perfect for what I wanted. A deal was done and I hired a van and shot up to Nottingham to pick it up. Shane, the guy who was selling the bike, is a big lad and said when he saw me: “Thank f**k you’ve got a bit of meat on you.” The bike is, you see, nearly 1600cc and kickstart-only with loads of compression. It’s a beast of a thing to kick over, but get the technique right and it’s easy. It’s taken me a while, but I’ve got the hang of it now.
I brought the bike home and set about stripping it down ready to hardtail. I wanted it to sit as low as possible, but still be a rideable bike. I fabricated the hardtail and fitted a Wassel tank, raked yokes, 16-inch wheels front and rear with Firestone tyres, straight ’bars, and a cool paint job, and my old school bobber was done. The bike, in my opinion, was stunning and’d turned out just as I wanted. It was a cover bike for BSH and was placed on the Custom Xtreme stand at the NEC that year. Not bad for a self-taught amateur and a shed-built bike, if I do say so myself! 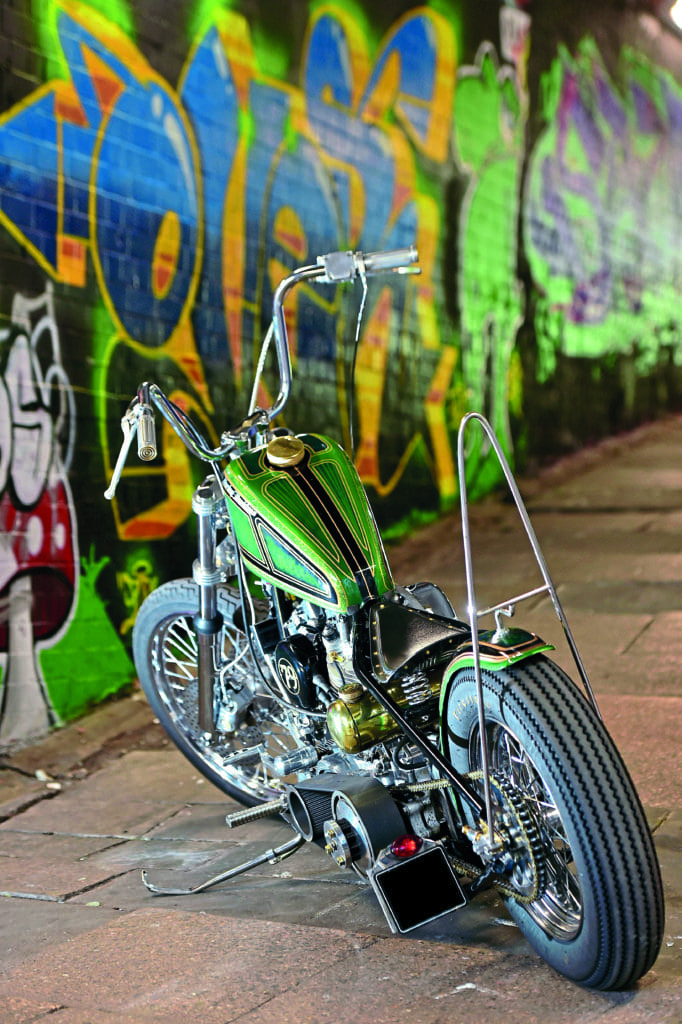 Fast forward a few years and after watching an episode of Biker Build Off that featured Indian Larry, I fancied a ’70s-style chopper as I’ve never had a chopper. I started looking for a suitable donor bike, but there was nothing in my budget suitable. After looking for what seemed like ages, I found myself looking at my Shovel, and the more I looked the more I thought it’d suit being a chopper. I was reluctant to change a bike that’d featured in the magazine, but thought if I gave it a bit of a makeover, not doing anything to it that I couldn’t undo, it’d be okay. Well, that was the theory anyway…
I stripped it back to a bare frame and engine and mocked it up with some bits I’d acquired over the years from other builds: a King Sportster tank, a set of apes, a 21-inch front wheel, a longer rear mudguard, all mismatched. I took a step back and looked at it. “Damn,” I thought, “it looks better as a chopper than as a bobber!” The lines were just bang on. There was a bit of work involved to make the new tins and front wheel fit – the bike has running twin front discs and the new skinny front wheel needed spacers for the discs and the axle. 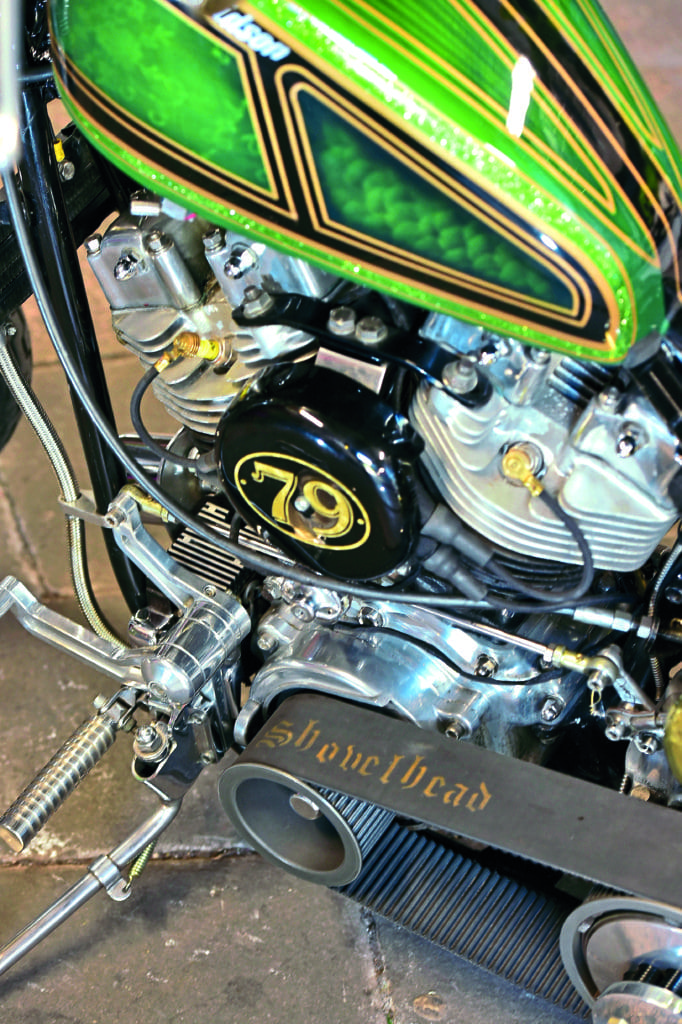 I’d just bought myself a lathe so this came in handy to sort this out. (I’m trying to do as much as I can myself, not outsourcing anything.) After I’d made the various brackets etc. to make everything fit, the bike was crying out for a sissy bar. A mate of mine, Steve, owns JSV Stainless Steel Fabrications (www.jsvfabrications.co.uk) in Swansea, and he’s an old biker from back in the day and loves a chat about bikes. He and his engineer Carl’ve helped me out with the odd job here and there, and he’s given me loads of stainless and would never take any cash for it – he’s just a genuinely nice guy who loves talking bikes and is always interested in what I’m doing. So, after sourcing some stainless bar off him, the sissy bar  was formed.
I primed the tins and fitted them to the bike, and I rode it around for a while like that as I couldn’t decide on a colour scheme. After looking online at pictures, everything I liked that was ’70s-style was air-brushed with glitter and fish scales – well beyond my painting capabilities. I’m okay at painting, but I’d never tried anything like this. No matter – I bought an air-brush and gave it a go. It’s now got fish scales, metal-flake glitter lines, stripes, net patterns and pearl paint. I don’t think it’s ever going to win any paint competitions, but it’s my  first attempt.
I love this bike and hope I never have to sell it. I think it’s turned out okay, but I must admit I’ve been stuck once or twice over the years, kicking and kicking, sweat pouring off me, cursing and swearing, trying to start it having just caught it wrong and flooded it. Normally it happens when there is a crowd gathered around waiting to hear it start. At that point I’d happily sell it or swap it for anything… 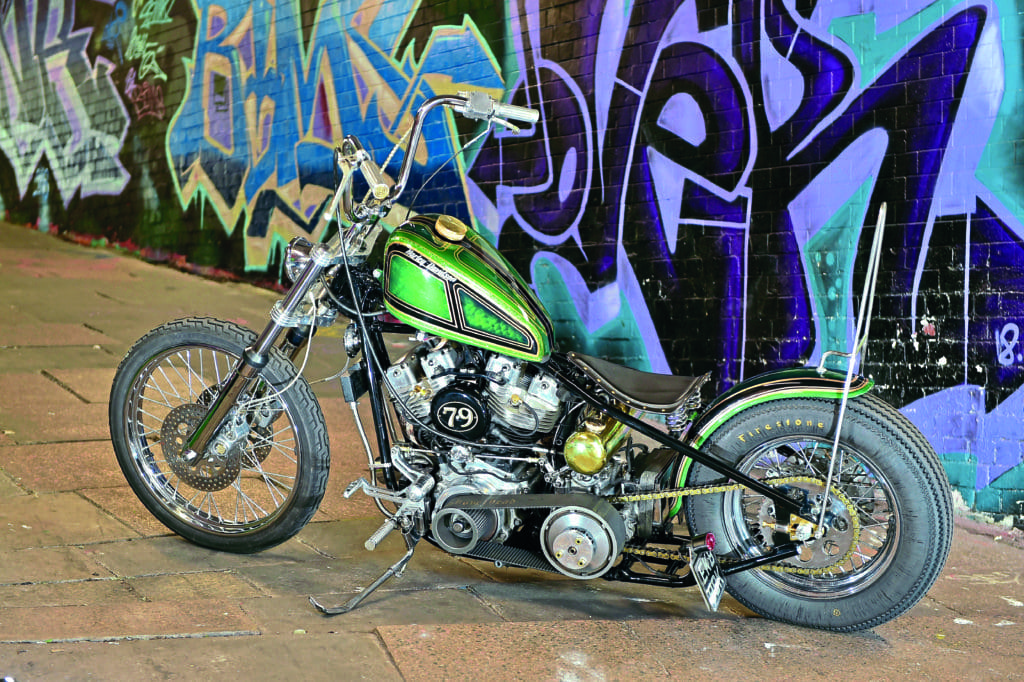