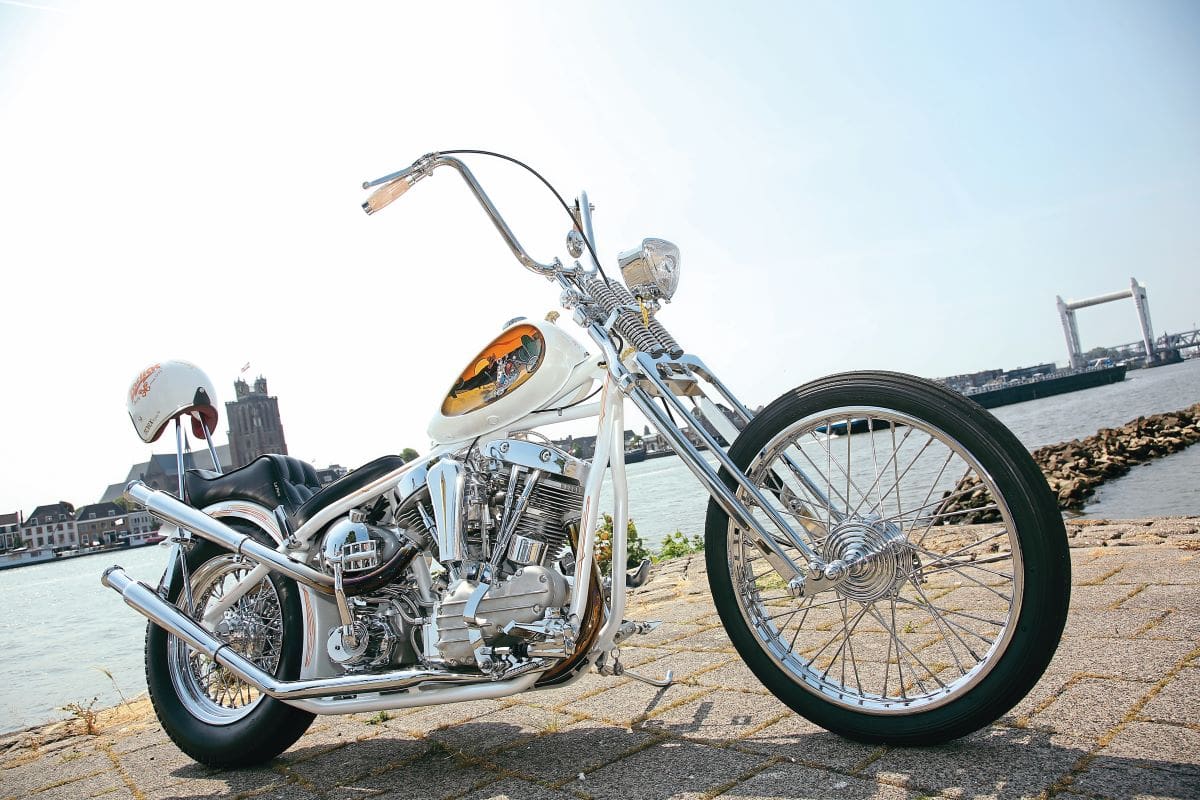 As an ode to the year Zodiac, the famous parts suppliers, started 1969, this cool chopper was built in the Zodiac workshop. The company is now 52 years old, and is a manufacturer and wholesaler of custom and replacement parts for Harley-Davidson, other American V-twin motorcycles, and customs.

1969 is the same year as the movie Easy Rider was released, with arguably the most iconic chopper, Captain America, starring in it, and the bike you see here in front of you was inspired by it. “It’s also an ode to Indian Larry, the chopper builder who stuck 100% to the style of choppers and bobbers of that era. A number of style elements such as the dished Mustang tank, and cylinder heads from different construction years, is something he was known for, hence the name ‘Captain Larry’,” explains Vincent Pels, the head honcho.

This chopper was built with parts from the Zodiac warehouse. “Charles, our mechanic at Zodiac, gets all the credit for building this bike,” said Vincent. “I always come up with the design, the styling, and the parts we’ll use for the creations we make, and discuss this with our employees, but Charles always has to make all those ideas reality. Kudos!”

He points enthusiastically to the sexy, shaped, petrol tank. “The dished tank is made from one of our Mustang tanks, and was initially designed and meant to be a one-off. We ground the sides out, and turned them over, so that the concave sides were now inward. We were so pleased with the result we immediately made a second one, and sent it as a prototype to Zodiac Taiwan to have it produced there. The tank’s now in our online catalogue, and you can buy one just like it.”

The engine, with its two different cylinder heads, Panhead and Shovelhead, is striking, and is a S&S 1530cc in the old style, but with modern technology and power. “Basically it’s a Panhead-style engine, the Alt/Gen version which resembles the old Generator engine, but has a modern (alternator) charging system. We set up an S&S Shovelhead-style cylinder head to use on it – the bolt pattern’s identical, only the recess of the cylinder edge in the head had to be slightly larger. Then it was a matter of mounting longer pushrods, and it was done!”

Naturally, all parts come from Zodiac’s warehouses. How nice it must be to be able to walk with your shopping cart between all those thousands of parts, and thus assemble your motorcycle yourself. “Well, actually, anyone can do that too,” Vincent says. “You can shop and order digitally on our website, and put together everything for your dream motorcycle to be built or converted, and then, with just the push of a button, you can send the wish list to your favourite Zodiac dealer in your area.”

Mechanic Charles used parts from the warehouse with minimal modifications, while also paying attention to ease of use. Riding a chopper does, of course, require some extra attention, if not only for the brakes, clutch, and shifting system. “Indeed, suicide clutches aren’t commonplace, and the first time you ride a motorcycle with one, it’s of course a special feeling,” Vincent says, “but you get used to it quickly and, after a few kilometres, you don’t know any better.”

Painter Jacco ‘Royal Jack’ (the guy doing the riding in these photos), talks about the collaboration with Zodiac. “Vincent approached me about painting their new show bike that was also going on the new catalogue cover. Of course, I was interested in the assignment. I also got to do the previous cover bike for Zodiac, which really feels like an honour. This time it’d be a real old school bike with suicide shift and all. Vincent always has a good eye for what he does and/or doesn’t want, but certainly leaves enough freedom for my own input, and ‘sparring’ about such a paint job is also fun, especially if you have that certain ‘click’ with someone, like in this case with Vincent, and you lift each other with ideas. He came up with the idea to use a light colour as a base, and give it a bit of a cartoonish touch, and he also wanted to try to keep the Zodiac colours in, so I incorporated them into the hand-painted graphics and the pinstriping.

A pearl white, which changes in the light, to cream was chosen as a base, and all the graphics are hand-painted. I designed the sides of the tank beforehand so we could see if the idea’d work – it’s a Mexican ‘Dias de los Muertos’ (Day of the Dead) look, and you’ll also see there’s a bottle of Corona beer in the rider’s hand to emphasise that the bike was built in the hectic Covid-19 time. I also deliberately redrew the engine for both sides of the tank because, otherwise, it’d be mirrored from one side to the other, which wouldn’t be right. All in all, it turned out to be a top bike if you ask me.”

The finished Captain Larry exudes the typical Seventies style, with the radiant S&S motor as the centrepiece, and the pearl white paint job with cartoon, the springer fork, and the high exhausts adding to this.

When you see it parked, you almost expect Peter Fonda and Indian Larry to be talking next to it, don’t you? It’s certainly an ode to both of them, and I’m sure Indian Larry, the New York custom bike builder, would undoubtedly’ve been very proud of it!

“Charles for building it; & Jacco…”

See Captain Larry, and all the parts that were used to build it, at the Zodiac website at www.zodiac.nl